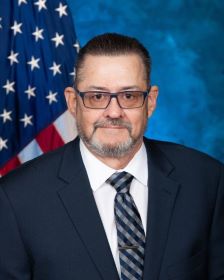 Franko Fritz was appointed as the Director of the Reno VA Regional Office on April 15, 2019. In this role he provides executive oversight, leadership, and direction to approximately 125 employees, manages an annual operating budget of $13.2 million, and provides a wide array of benefits to 221,996 Veterans and their families residing in the state of Nevada.

He previously served as the Executive Management Officer for the Pacific District Office in Phoenix Arizona from April 2015 to April 2019. The Pacific District Office provides leadership, support, and oversight to more than 3,000 employees located at twelve Regional Offices in eight states, including offices in Alaska, Hawaii, and the Philippines. As Assistant Director of the Salt Lake City, Anchorage, and Ft. Harrison Regional Offices from October 2012 to March 2015, he had oversight of more than 600 employees and four national missions. Franko retired from the US Army after 21 years active duty, serving in Panama, Honduras, Egypt, Israel, and at the Academy of Health Sciences, Ft. Sam Houston, Texas.