Preliminary information was previously provided in this table. We are providing the final figures that have been confirmed by State Approving Agencies in accordance with VA's statutory requirement to determine the highest in-state, undergraduate, public tuition as specified in 38 USC 3313(c)(1)(A).  This information has no relationship to, and should not be compared with, average costs of tuition and fees of public institutions within any state commonly referred to when considering educational options.

This information is being made available to assist veterans and schools with their planning.

What factors were considered when determining the tuition and fees listed?

All undergraduate program costs were taken into consideration to determine the highest in-state maximum tuition per credit hour and the maximum fees per term. These figures may include program tuition for high cost programs such as flight courses taken as part of a degree requirement or undergraduate pharmacy, nursing, and engineering charges.

1 Previously posted as $254.00 per credit hour - changed to $0.00 on April 17, 2009. Verification provided that California public colleges and universities do not charge resident undergraduate tuition. 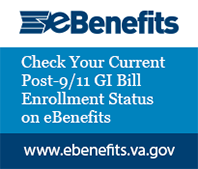 Keep receiving education and training benefits from VA by verifying your attendance.